Scroll down to
explore more 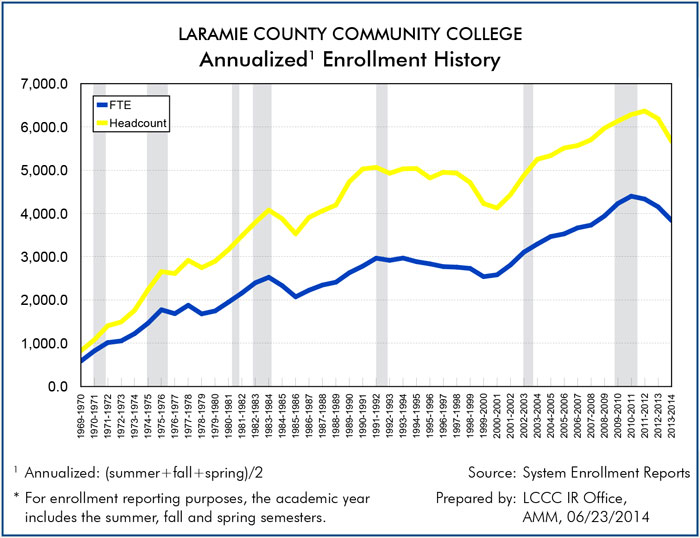 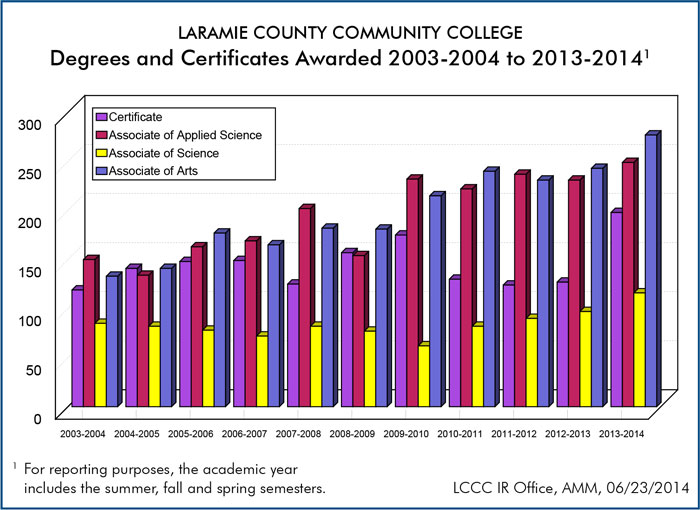 Accompanying the enrollment growth has been a growing number of graduates from the College. See Figure 2 above. There were 487 degrees and certificates awarded in the 2003/2004 academic year and 840 in the 2013/2014 academic year, an increase of approximately 72 percent and representing the largest graduating class in the institution’s history. However, the increased numbers of degrees and certificates awarded appear to solely be a function of increased enrollment.

The rate at which LCCC students succeed is considerably lower than other comparative institutions. For example, the fall 2011 Integrated Postsecondary Education Data System (IPEDS) data shows LCCC’s graduation rates in all three of the categories measured (completion in normal time, 150 percent of normal time, and 200 percent of normal time) to be lower than the median of the comparison group of colleges. LCCC’s overall graduation rate in this report is 13 percent, compared to that of the peer institutional average of 21 percent. At the same time however, the transfer out rate is higher (33 percent) than the median of the comparison group (20 percent).

Access and affordability are still cornerstones of community colleges, and fortunately an education in a Wyoming community college such as LCCC is an exceptional value. The cost to students and their families remains low at LCCC because of the sustained investment of the state and local taxpayers. LCCC’s revenues derive from three sources – tuition and fees, local taxes, and state appropriation. Wyoming has continued to invest in higher education as a state, with more than 60 percent of the College’s funding coming directly from the state. Even with recent budget reductions in the current biennium, LCCC still spends far more per student than our peer institutions.

The Wyoming Community College Commission (WCCC) has the statutory responsibility of setting tuition for the seven Wyoming community colleges, and though they have continued to raise tuition on an annual basis, it still ranks as the most affordable when compared to other community colleges in the WICHE region. Low tuition and fees, matched with strong median household income, and supported by healthy merit-based financial assistance from the state and College, makes LCCC a great value for both residents and neighboring states. The only area of continued concern is the lack of any state-funded need-based financial assistance.

As mentioned previously, it is critical that community colleges across the nation help students stay engaged and, ultimately, succeed in their post-secondary pursuits. Institutional improvement in this regard requires a diligent, evidenced-based assessment of how institutions perform. To this end, LCCC has adopted a comprehensive set of key performance indicators (KPI’s) and is in the process of developing a rigorous system of assessment for these and their accompanying measures. While still in its infancy, initial analysis has provided a foundation for assessing the College’s current effectiveness in helping students succeed and how efficiently we do that. A summary of the current state of institutional performance according to the KPI’s was presented to the strategic planning team and has informed this plan.

Although LCCC has been blessed with strong finances, dedicated community support, and increasing enrollment, it has also faced challenges. From the mid to late 2000s, the College struggled under strained leadership issues. In fall 2009, the College administered a survey as a result of institutional tension and concerns about the organizational climate. The survey consisted of a series of statements to which employees were asked to indicate their level of agreement. Approximately 70 percent of employees participated and the results indicated a strained internal climate. In 2011, the Board of Trustees engaged the College Brain Trust to conduct a comprehensive organizational assessment to examine organizational structure, staffing ratios and other key practices and processes with a specific focus on the human resources structure of the institution. The CBT’s findings and accompanying recommendations were released to the campus late 2011, and became a priority of the new president when he took office in January of 2012.

With this knowledge, current leadership at the College has brought a new focus on reinventing the College and its culture into a community that is student-focused, committed to the highest quality standards and performance, and dedicated to student success and completion. This is proven in actions already taken by administration to reorganize several key areas of the College. Some examples include: strengthening the Human Resources function; more closely aligning programs with relevant functional areas; reinventing College Council to serve as the institution’s shared governance body; focusing on updating outdated policies and procedures; and involving individuals campus-wide in the development of this strategic plan. Initial results of this work are showing promise.

There is a solid start and a strong foundation, from which a new culture at LCCC is emerging. During a June 2013 SWOT (strengths, weaknesses, opportunities and threats) analysis conducted with campus-wide representation, LCCC’s strengths were discussed and current leadership was identified as a strength within the College. Other strengths identified included, but are not limited to: strong community and statewide support, a good reputation with our primary stakeholders, employees who sincerely care about our students and the College as a whole, experienced staff and faculty who are committed to providing high-quality education opportunities for students, and teams willing to implement needed changes to support student success and completion.