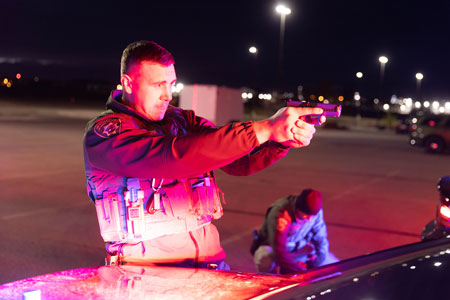 Keeping Wyoming’s roadways safe is no easy job. That’s why recruits for the Wyoming Highway Patrol come to Laramie County Community College to take on rigorous training, preparing them for a career in public safety.

Sgt. Harley Kalb, the Wyoming Highway Patrol Academy coordinator, has been with the WHP since 2016 and has been an instructor at the academy since 2020. The coordinator job is important, he said, because he has a powerful role in shaping and molding what kind of troopers the recruits will become.

“That’s the best part because you have some influence in the outlook of the agency, the outlook of law enforcement, and then you can also regulate the training to make sure they’re getting the highest-end training possible,” Kalb said.

After a hiring process that includes a deep background check, the academy is recruits’ second step in becoming a WHP trooper. Two full academies each year, one from January to May and the other from August to December, brings recruits to the residence halls at LCCC where they live for 20 weeks. When recruits successfully complete the program, earning a credit diploma, they are eligible for immediate employment.

The most important quality in troopers the WHP looks to recruit is having the right mindset, Kalb said.

“That means they’re getting into law enforcement to help people and help their community,” he said. “They also need to have the strength and determination to put up with the rigorous duties that they’re put through. Whether that’s facing scrutiny from the public or being in a fallout fight with someone while having to use force, we need to make sure that they’re strong enough to withstand that while also having the right mindset and heart to help the community.”

Recruits prepare for the job by covering a comprehensive list of skills. Everything from having a thorough understanding of state statute and the U.S. and state constitutions, the court system, arrest law, counter ambush, custody and control, proper use of force, aiding those in mental health crises, domestic violence and much more is included in the curriculum.

No matter how much preparation recruits go through, Kalb said they can’t be given the answer to every problem they’ll face in the field. That’s why the hiring process is so important, he said, because recruits need to be able to demonstrate that they will make sound decisions in difficult situations.

“We also hire people that think outside the box and critically think and problem solve,” Kalb said.

Despite all the challenges, Kalb said the work is rewarding in how troopers help people in need.

“The most rewarding part is being there and supporting the families after the fact, answering their questions being that voice of reason at times,” he said.

Kalb said he sees significant change in most recruits from the time they enter the academy to completion. Recruits who may be shrugged over and lacking confidence when the academy begins are standing tall by the time they are sworn in.

“They’re glowing with the amount of confidence that is just pouring away from them, and that is amazing,” Kalb said.

The partnership between the WHP and LCCC allowing recruits to train on the Cheyenne campus is critical to public safety in Wyoming. Kalb said the relationship is much appreciated by law enforcement.

“They’re extremely accommodating to us, as they have opened up their facilities for us to use,” he said. “They’ve also given recruits the ability to earn college credit. They’re very welcoming.”