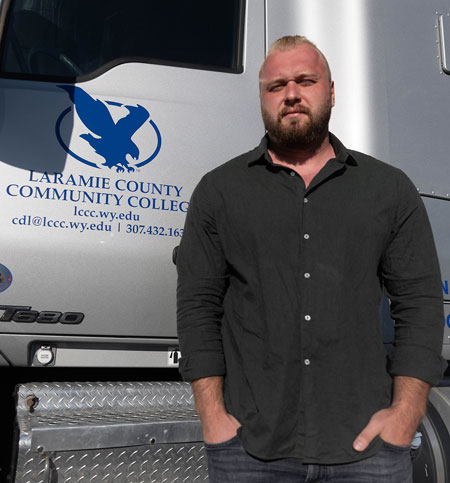 It was around 4 a.m. when Olekdsandr Ageyev and his family, who were living in Kherson, Ukraine, heard the sirens signaling that Russia was invading.

“When this all started, we only had like 30 minutes to pack all of our stuff and go to Western Ukraine,” he said.

Ageyev along with his wife, 6-year-old daughter and cat, Malish, hurried to Lviv where they would stay until it was clear the situation was untenable. An oil tanker explosion near the place they were staying was the final straw for Ageyev, who decided they needed to leave Ukraine as soon as possible.

After making a long drive to Austria, Ageyev, 31, was able to connect with Meadowbrooke Church in Cheyenne, Wyoming, that would help the family escape the dangers of war, bringing them to the U.S. in late July.

“It was a long story — a lot of documents, a lot of paperwork — but the church helped us a lot to move here and with housing and all that stuff,” Ageyev said.

Though he worked in information technology in Ukraine, Ageyev said he wanted to try a different path to support his family now that he’s in the states. Through some of his newfound connections in Cheyenne, Ageyev was able to enter the Commercial Drivers License Certification program at Laramie County Community College.

Ageyev received financial assistance through the Wyoming Department of Workforce Services pre-hire grant for CDL students and in early October completed the program. By the end of the month, he expects he’ll begin working driving a truck.

“I enjoyed the program a lot because I learned a lot of new things,” Ageyev said. “Not only about driving the truck, but about inspecting the truck.”

The visa program that allows Ageyev and his family to stay in the U.S. lasts two years, and it’s not clear what will happen with their refugee status after that. As such, Ageyev said he’s not sure whether his family will remain in the U.S. permanently. But in the meantime, he said his family is loving their time in Cheyenne.

“I'm still happy that I'm saved and I'm in (a) great country and my daughter is in a great school,” Ageyev said. “"We still have little problems with all this moving stuff, but my wife is actively learning the language at LCCC (English as a second language) classes, and at school the teachers try very hard to help my daughter adapt. But we are happy for now."

Even at the most dire moments, Ageyev said he never lost hope.

“I was just thinking that I will be good because I need to; I was thinking about my family,” he said. “This was the first priority for me.”

“I can sense the enthusiasm and eagerness of Oleksandr to take advantage of this opportunity,” Geissler said. “He is determined to make the best of this situation in order to provide for his family.”

Today, the future looks bright for his family, Ageyev said. The opportunity to take on the CDL program at LCCC has been a key part of that future, and the people at the college helped make it all possible.

“The instructors here are very good,” Ageyev said. “These guys are very experienced, not only in terms of the truck and the technical stuff, but they also guide you through the business stuff. For all the insurance stuff, taxes stuff. They talk about what company is good, and what's not in their opinions. They’re just like mentors.”