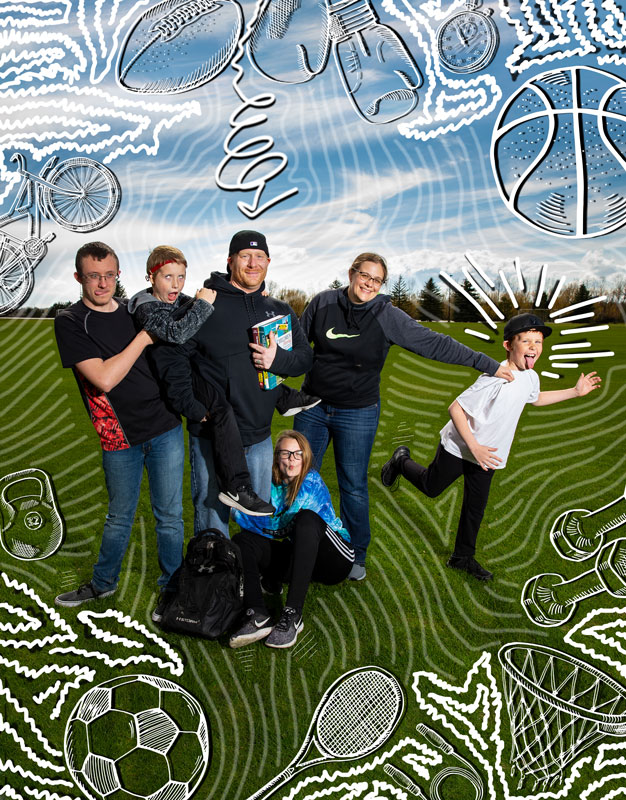 It seems that often life is full of busy, harried days, when life feels like an endless to-do list. But for some college students, that chaos can ultimately lead to some fantastic opportunities, even if the path to get there is a little daunting.

Take Zach Hammons, for example. A Cheyenne native and graduate of East High, Zach started out in the restaurant industry when he was just 15. Always a hard worker, he successfully worked his way to the position of manager at a couple of high-traffic eateries in the city.

After 17 years in that field though, he knew it was time for something more. Almost casually at first, Zach explored the idea of getting a college degree.

"I decided I wanted to come to school. I thought through what would work best for me and my family, what I'm passionate about," he said.

LCCC was that school, and exercise science ended up being the program that called to him. As a child, Zach's dad coached youth sports, and that passion grew in Zach as well. He began exploring a degree in physical education.

But there was a challenge: Zach is married and a dad to five kids. Plus, he'd need to stay at his job, working 30 hours every week. "It was stressful, especially since it's been more than 10 years since I'd taken any kind of classes," he said.

Zach even had some concerns coming in as someone older than the traditional student, even though nearly one-third of all LCCC students are 25 or older. "But it went smoothly," he said with a chuckle.

His wife, Sarah, had an idea how difficult this entire change of lifestyle could be. "We had to recreate our balance, get organized with all five kids. It takes a village to raise a child, and we have five of them," she said. "But we get it done."

Dr. Cindy Henning, program director for exercise science at LCCC, is one of Zach's instructors. She finds that his background and challenging lifestyle make him a better student. "He works hard to take advantage of his time. He asks question and overlays his experiences with what he is learning," she said. "Zach is open to things he can change and even when he has taught a lesson exceptionally well, he still wants to know what can be improved upon."

According to Henning, Zach maintains a 4.0 grade point average and is a member of the program's honor society. "I'm trying my best, trying hard every day," Zach said. "I'm serious about doing this." He is the first person in his family to go to college or even take college courses and talks about how much he wants to be a role model for his children.

"I want to inspire them as well."

Zach shared that it can be interesting at home, with books scattered about and his kids asking "How was your day at school?" He still strives to be involved in his family's life as much as possible, knowing how important they are to achieving this dream.

Tears well up in Sarah's eyes, thinking about her husband working toward his lifelong goals. "He gets to follow in his father's footsteps," she said. "He gets to be the father to his own kids that he had growing up."

Zach is on track to complete his degree next fall. He's already completed an internship with the women's Golden Eagle basketball team, and he's looking to transfer to the University of Wyoming or the University of Northern Colorado. After that, he hopes to teach and coach elementary school students in this area.

What advice would Zach offer to other adults thinking about starting their college journey?

"No matter what stage of life you're in, you can always better yourself. Juggling everything as a non-traditional student is tough, but the work will be worth it in the long run. Get out there, do what makes you truly happy, and the rest will fall into place."