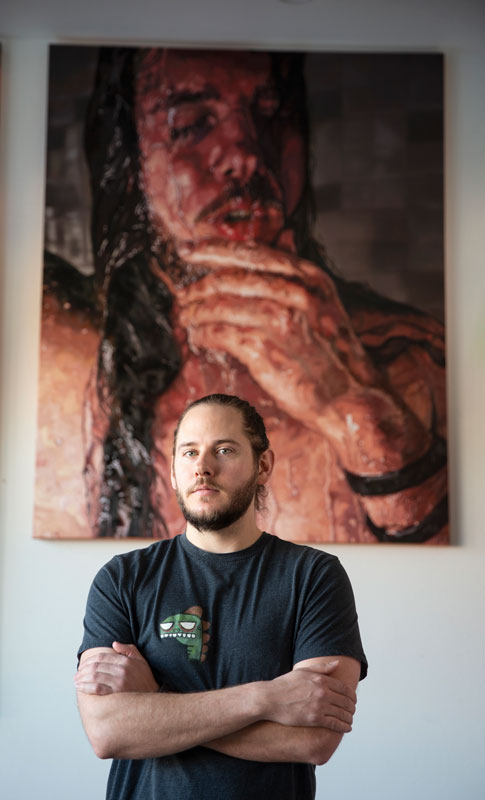 On the ground floor of a modern building in the heart of Denver, an artist tends to his studio, which also doubles as his apartment. The place sits around the corner from a tire shop that’s been in business for more than 50 years, and iconic restaurant Casa Bonita is just a few blocks away. The neighborhood is growing in the way that mixes the comfort of longtime businesses and residences with an influx of new buildings and a creative spirit focused on the area’s future.

The studio literally smells of art. It’s a space filled with paints and canvases, works in various stages of progress, and the energy of creation.

Inside sits that artist, James Overstreet.

“In high school, I wasn’t the best student. I was always goofing off,” James admits. “After graduation, I was aimless for a few years until I had a child. I looked around and saw I didn’t have a path. I wondered what I was doing with my life.

“I initially went to LCCC just to take a class,” he shared. “Not to get a degree but to learn the basics and improve my skills and technique.”

The class, taught by Ron Medina, was Painting 1. It all changed for James after that.

In 2014, James got his associate degree in art and, because of his grades and contributions to the community, he received a full-ride scholarship from the Rocky Mountain College of Art & Design, where he received a Bachelor of Fine Arts.

But James’ experience with LCCC stayed with him, especially the time spent learning from instructor Ron Medina.

“Ron was a father figure. He’s a smart man and not just about art,” James said. “He really inspires people and tries to push his students to do their very best.”

“Early in my relationship with James, I saw a transformation from being a student to being part of the program,” Ron shared. “He didn’t just ‘show up’ for class; he embedded himself in the program and all we had to offer. He uncovered everything possible about how art could be done.”

James describes his procedure as constantly changing. “I’m trying to let paint be paint. Painting is a never-ending process of learning.”

He acknowledges that his work is both abstract and representational, adding “… but really it’s a brush stroke next to a brush stroke that ends up resembling something.”

Overstreet’s main focus is oil painting; however, he is accomplished in acrylic and watercolor. He occasionally works in other mediums, such as sculpture, drawing and photography. In fact, James recently had a stint as artist-in-residence for 40 West Arts District in Denver.

The region is taking notice. James has had numerous exhibitions in Wyoming and Colorado, even winning Best in Show at the Lakewood Cultural Center for his self-portrait, Bastard, (preceding page). The Philip J. Steele Gallery in Denver recently displayed his work, and he’s been invited to exhibit for the Pink Progression project in October.

As for his future, he’s definitely keeping busy. The challenge of working 80-hour weeks between the business side and the artistic side certainly keeps him occupied, even as he winds down his residency. However, not unlike Ron Medina, James hopes to someday teach at the college level so that he can inspire others the way he was inspired.

“His success is due to his own drive and passion,” Ron said. “I’ve just been fortunate enough to be a witness to the process.”

James said it himself: “Art has always been a part of my life and always will be.”